In the Age of Gods: The Blue Bird Clan people and the people called mai desh kzish ni moved up the canyon and built a house which they called Ken tiel. The rest of the people went in different directions and built new homes. There was another place east of Ken tiel called Sis kit. Above them there is a place called Hada'na y be', the house made of banded rock. The people living there were visited by a giant. He was also the Sun's son. 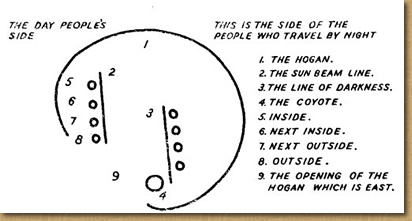 The chart of the Moccasin Game.

This giant spoke to the people there. "My grandchildren," he said, "let us play the Moccasin Game." They said: "We do not know that game." So he went away; but the next day he returned and said: "My grandchildren, I would like to play the Moccasin Game with you." They told him: "Grandfather, we do not know this game." Again he left them, but on the third day he returned. "My grandchildren, I have come to play the Moccasin Game with you." But their answer was the same. Now after he had left them the third time there came a certain bird called nat tsile gine who said: "This person is called One Walking Giant. When he asks for the game again tell him that we will play the game at a place called a Red Rock where the Big Snake lives. All the sacred People will gather there.

The giant came for the fourth time and said: "My grandchildren, I have come to play the Moccasin Game with you." They said: "All is well, Grandfather; we will hold the game over in Red Canyon where the Big Snake lives. The Giant was greatly pleased. "Oh, my children, that is well; that is what I came for." They told him that they would send word to all the sacred people in the world, that in 4 days they would gather in Red Canyon. The Giant was delighted with the plan. And on the fourth day all the people from the clans and the rocks gathered there.

When the holy people from the sacred places came together in Red Canyon they did not know that the Sun had another great plan in which he figured that he would get even for all the mistakes he had made through the Gambler.

At the end of the fourth day, at twilight, the Giant came. Now he had a feather from under the wing of an eagle which be kept laying against the palm of his hand. From the feather in the Giant's hand to the moccasin where the little ball was hidden shone a faint, gray ray of light like an almost invisible rainbow. This would help him win. He had the counting sticks with him, the little ball and the small, curved tapping stick. He brought them all to the Red Canyon of the Big Snake. The counting sticks were 102 in number. The Giant got them from the Sun's 102 trails.

The Coyote came to Red Canyon. He said that as long as he traveled both by night and by day he would be on the winning side, whichever it might be.

All was in readiness. The Giant entered the cave (hogan) and the guessing began.

This is the game:

There are 102 counting sticks in the game. The sticks are tied in a bundle; they are used as counters to pay the points back and forth. When one side wins 102 points they have won the game. Now this game determined the value of everything, all goods and possessions were assessed by this game. If the ball is placed or "buried" in the next outside moccasin the count is four. It can be four of anything bet, four "bits," four dollars, etc. If the ball is next outside, and the guesser guesses outside, the count is six. It costs the guesser six points. If the ball is inside, and the guesser guesses next inside, it costs him four points. If the ball is next inside and the guess is inside, the cost is six. Now if the guesser taps more than once on a moccasin and the ball happens to be in it, it costs him ten points. One tap means "in there." More than one tap means nothing in the moccasin. If the ball is in the moccasin when he taps once he takes it out and throws it to his friends. It is then their turn to bury the ball.

The Giant explained the manner of betting and showed them the way to play the game. He said: "Now this is not going to be a free game. All those of you who travel at night will bet the night against the day. If I lose there will be darkness always." (Later it was learned that because the Giant's father was the Sun he was sure of winning. And besides the feather he was to carry in his hand, the Giant was given a sunbeam to wrap around the ball. With this he was sure to win.)

The Giant took a cornhusk, thin as paper and out at both ends, which had been painted black on one side to represent darkness, and white on the other side to represent day. They were to toss this cornhusk in the air, and when it fell to the earth whichever side showing would have the first chance to bury the ball.

The antelope had the ball. He sang out: "Gray, gray, gray," and everyone could see him. Now as each animal took the ball he sang. The song is repeated over and over if the opposite party misses the guess.

note: The songs of the different animals are used in the Moccasin Game. You can make up your own rhyming songs in your native languages.

The big being called the Giant
is trying his luck
To get the ball,
Crying as he says:
Please place the ball
In the same moccasin next time.

The crow is a boy
Who got blackened by soot,
And he can not guess
In which moccasin
The ball is placed.

The magpie, the magpie.
The white feather is for the dawn.
The ball is right down in here.
Now it is dawn, now it is dawn.

10b. Another Bear's Song

Gray, gray,
Just in plain sight,
There the antelope stands.

The old man owl,
The old man owl.
He is jealous of me
Because I am the only one
Who brings home a rabbit,
Which causes "pain in my neck."

17b. Another Turkey (Gobbler's) Song

The chart of the Moccasin Game.

A certain bird who had bright eyes rose and suddenly struck the moccasin in which the ball was hidden. He took it and tossed it to the night people. The owl caught the ball and said: "Old man, old man is jealous of me because I am the only one who carries home the rabbit." He sang as he buried the ball. After the owl buried the ball out came the Giant. He wrung his hand and with two fingers pointed down to the moccasins. The gray streak of light shone and he grabbed the ball and tossed it back to his friends.

First one side then the other won until the night was half over. At this time the owl kept the ball in his hand instead of placing it in a moccasin and the Giant missed his guess. Soon the Giant had tears in his eyes and they ran down his cheeks. The owl saw this and said: "Old man called Giant is weeping over his poor guessing, weeping and saying 'Bury the ball where I guess for once.'" The Giant was losing the game. Now the day people had lost one hundred points and there were only two points left. They took hold of the Giant and told him to sit down. They asked the locust to dig into the earth and to go to the moccasins and see where the ball was hidden. The locust agreed. He left his shell there for all to see and he dug down into the earth and when he returned to his shell he said: "There is no ball in the moccasins." (That is why the locust leaves his shell and goes into the earth.) Next the gopher went to the moccasins and found no ball. Then one of the day birds went forward and "killed" a moccasin. No ball was in it. He pretended to strike a moccasin when the owl went for it, but the bird hesitated and said: "Wait a minute, grandfather, keep your hand away." And each time that the bird struck a moccasin the owl tried to reach the next one but his hand was held. At last the guesser hit the owl's hand and out rolled the ball.

It was towards dawn by that time and they heard a curious noise outside. They sent the two Yei, Hasjelti and Hasjohon to see what was happening. They returned and said: "The sound is coming nearer." The people told the two Yei to sit out there, side by side, and to wait and see what this strange thing could be. In the distance the Yei saw two skulls approaching. They were the skulls of two people who had died and returned to the Yellow World. Now they were coming and they intended to harm someone of the assembly. They were given presents and sent away.

Now when the owl dropped the ball all the birds and animals chose whatever designs and colors they wished to wear in the future, The crow and the bear had been asleep. When the crow heard what was happening, in a great hurry he dipped himself in charcoal and went off to his home. They slapped the bear and said: "Wake up. It is day." The bear jumped up and reached for his moccasins, and he made off just as fast as he could go to the mountains. But he had put his left moccasin on his right foot, and his right moccasin on his left foot, and that is why he has strangely shaped feet. Also, as he reached the mountain the first rays of the sun bit his fur, and that is why some of his descendants are brownish.

The Giant's plan had failed. The game had not come out as he had planned, and, as he had not won all the time, it was not always to be day.

It was a rule that till the different persons who grew to be great powers, once they made a mistake, forfeited their lives. So because the Giant made the mistake of letting the owl outwit him the holy people came together and planned how he, and at the same time all the monsters who destroyed those living upon the earth, must die.

note: They call this Tse tsina tage, the Two Skulls who Came Back. This is the origin of the Dead Spirit Fire Ceremony. Since that time, whenever a person sickens in spirit this is the ceremony used over him. And here all the chants and prayers of the Dead Spirit Ceremony come in.