THE DEPARTURE OF THE WHITE BEAD WOMAN
From the Navaho, The Wanderings

Then the time came for the White Bead Woman to depart. Before her stood two persons, one was Niha oni gay hasjelti, and the other was Niha oni gay hasjohon. There were also 12 male beings, the De'n'yeinaki zatana queye hahoni'gay denae e, the Four Rain Clouds, and all the flowers, and another 12 persons, female beings, and with them were the Four Vapors. The White Bead Woman spoke to these people. She said that it was her plan to have all tribes, other than her own people, move beyond the sacred mountains. She said that she wanted her children to live on the land within these sacred mountains. Then she rose up in the clouds and went to a place called Ta'delth hilth tzes taan Ta'dottliztzes taan, and with her went all her power, and there was no more of her power left on the earth. Now people have to work in order to live; they know hardship.

After that time the White Bead Woman's home was called the Floating White Bead House, also, the Floating Turquoise House. Around her home is flat country called the White Bead Plain. To the East of her home is the Most High Power to whom she goes and becomes young again, and by whose power she knows all things. In the four directions from her house she undergoes a change. She comes out of her house an old woman with a white bead walking stick. She walks towards the East and returns middle aged; and she carries no walking stick. To the South she walks and she returns a young woman. She walks to the West and comes back a maiden. She goes North and returns a young girl. She is called the White Bead Woman, Yol'gai esdzan. She has three names, and the second is the Changeable Woman, Atsan a'layee. The third is Yol'gai atate, the White Bead girl. She has these three names, that is her power. Only one person knows the origin of her power, he is the Most High Power Whose Ways Are Beautiful. 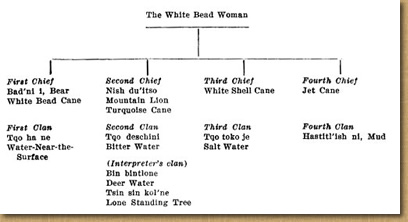 note: Esdza na'dle, Changing Woman; Yol gai'esdzan, White Shell Woman; Esdza na'dle esdzan, the Changing Woman, the wife of the Sun. The White Bead Woman went West to the Great Water; she vent to dwell in her floating house beyond the shore.

note: Coyotes were as the telephone is today.

The White Bead woman can use only one kind of seeds during a season for the people's use. These are the seeds used for food. It would cause her sorrow if the people did not eat the ripened seeds of plants whose seeds she planted for them. She has all the seeds of all the plants with her. She has great power over the people.

The White Bead Woman sent four persons back to the center of the earth to see how her people were getting along, and how the mountains were standing. The Four who went back were Niha onigai hasjelti and Niha onigai hasjohon and two from the same people. They were to travel around the mountaintops and chant as they went. They went first to the top of the mountain called Yol gay dzil. The chant begins there.

Each of the six sacred mountains with their stones are covered in this chant.

note: This explains why, in this country, each year, there is an abundance of one special plant or flower.

note: These were the first two persons who stood before the White Bead woman.

note This chant is called Tsun bey dzil gaye a'desdai, the Chant used to travel safely over the mountains.

The four persons reported that all the mountains were just as they were originally. They were beautiful and all the growing plants were beautiful. The whole country was beautiful. People were living peacefully. They had rain.